An Expert Panel’s Look at the Best of the Year

Weird. Pricey. Those words best describe the kid’s toy industry as we head towards the holiday. Analysts are saying that there’s no single standout gotta-have-it product but high-tech toys are high on everyone’s list. Preschoolers are getting $400 iPads; tweens getting their own iPod Touch. Some of most sought after toys are the LeapFrog LeapPad Explorer Learning Tablet that sells for $200. It’s sold out of most stores with parents eagerly watching to see if stores like Toys-R-Us will manage to restock the shelves before the holidays. Other trending toys include Hot Wheels Wall Tracks and Figit Friends – animatronic buddies for all.

But, lurking quietly behind the hub-bub of shopping lines and gadget blogs, there are some gems lying unrecognized. Each year a panel of 15 judges with decades of experience in the kid business get together to seek out the best that the digital world provides for youngsters. Called the Kids @ Play Interactive (KAPi) Awards, these prizes are doled out during CES at a special ceremony honoring creators of good tech for kids. Here’s an inside look at whats to come at the 2012 KAPi Awards…

Does it pay to buy an iPad?

From the looks of some of this year’s winners, it seems that some of the most creative work for kids is being done on Apple iPads. While the initial iPad investment might be a bit fear-inducing, once you take the plunge, the cost of an app is minimal.

DoodleCast by Zinc Roe was selected as best app for young kids. It’s a simple app that allows kids to draw and add voice to their drawings – your kids will create their own animated storybook. Best of all, it only costs $1.99 and is available on the iPad or iPhone. For older kids the winner was Bobo Explores Light by GameCollage LLC, a $5 app that lets kids explore the physical properties of light, including color and photosynthesis. In the world of digital children’s books the award went to Cinderella Nosy Crow Animated Picture Book where a 3D-like world allows kids to sweep the floors with Cinderella and more. Apple nabbed the Best Hardware award for the iPad2, with LeapPad Explorer following close behind.

The best video game software award went to Once Upon a Monster (Warner Brothers Interactive Entertainment, Inc) – an unbelievably rich game for the Xbox Kinect where parents and kids can play on Sesame Street, actually controlling Cookie and Elmo with their body movements. Disney’s AppMates received an award for the most innovative technology – Disney combined a miniature car toy with embedded capacitive sensors that kids use to navigate an adventure-filled race track on the iPad screen. The game has a Cars movie theme.

Noodlewords from Noodleworks, an app that brings words to life as they dance and jump across the iPad screen, won best educational software. MineCraft by Mojang won for the best kids’ virtual world – the judges loved the “hide and seek” feel to the world.

People as well as products were recognized. Ge Wang, co-founder and Chief Creative Officer at Smule won the Emerging Pioneer Award. He created the Magic Piano so that people all over the world could make music collaboratively. Mark Schlichting, creator of the Brøderbund Living Books and now Noodlewords, was recognized for delighting a generation of younger readers two times over.

For more about the KAPi Awards and the judging process visit Kids@Play. 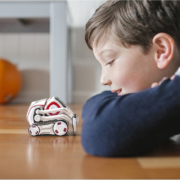 Counterintuitive? HP Pushes for Print as the New Delivery Medium

An Appendix of Kids Apps

Growing in LeapPads and Bounds

Vita PlayStation Trendy 2011: Tablets Up, 3D Down
Scroll to top